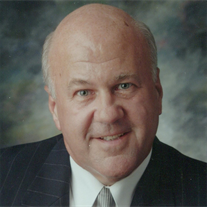 William C. Roeger, Jr. 69, of Naples, FL and Collegeville, PA died on Sunday, October 30, 2016 after a 10 month courageous battle with a rare disease, A L Amyloidosis. He was the beloved husband of 46 years to Ellen R. (Ball) Roeger.

Bill received his undergraduate degree in Physics from Muhlenberg College in 1969. Thereafter, he was a Distinguished Graduate from the United States Air Force Officer Training School in 1970. He served in the U.S. Air Force Reserves for 13 years. He received his law degree from the Dickinson School of Law.
Bill was a Principal of the firm and a member of the Litigation Department at Hamburg, Rubin, Mullin, Maxwell & Lupin. He tried cases in Bucks, Montgomery, Philadelphia, Lehigh, Northampton, Carbon, Monroe, Luzerne, Berks and Chester Counties. His distinguished career includes a substantial amount of motor vehicle, real estate, commercial, personal injury and orphan's court litigation. Bill's prior experience as a corporate attorney, when coupled with his science background and problem-solving approach, led him to the position of general counsel of a number of mid-sized firms. In this capacity, Bill advised the clients in a wide variety of areas and handled the litigation matters that those companies have.
Bill began his legal career drafting legislation for the Legislative Reference Bureau, which is part of the Pennsylvania Legislature. Upon graduation from law school, he took a position as part of the Corporate Law Department of the Pennsylvania Power & Light Co., handling a wide variety of legal matters. After approximately six months, and particularly in view of his physics background, he was selected as lead counsel on the billion dollar nuclear power plant that was being built by PP&L at the time. After several years Bill entered private practice where he has remained ever since.
Bill was an active member of the Pennsylvania Trial Lawyers Association (now called the Pennsylvania Association for Justice) throughout his career serving on its Board of Governors since 1980 and spending approximately 30 years on its Executive Committee. Bill was also a member of the American Bar Association, the American Trial Lawyers Association (now the American Association for Justice), the Pennsylvania Bar Association, and the Bucks County Bar Association. He was involved in teaching law to his peers and had lectured and written for the continuing legal education arm of the Pennsylvania Trial Lawyers Association on trial practiced subjects. Bill was a member of the Perkasie (Bucks County) Rotary Club since 1975 and had served as President of that organization. Very involved in local politics, Bill served on the Bucks County Republican Executive Committee for seventeen years. He also served as Vice President of the Lutheran Community at Telford "Fund Board," which manages the money and investments of the entire retirement community. He was also a member of Peace Lutheran Church in Perkasie, PA and had served on the church council.

In addition to his wife he is survived by 2 sons: William C. "Rocky" Roeger, III and his wife Kelly; Matthew B. Roeger and his wife Deanna
Grandchildren: Madison, Abbie, William C. "Liam" Roeger IV, and Riley

A Memorial Service will be planned at a later date at the Naples Sailing & Yacht Club in Naples, FL.

In lieu of flowers, contributions may be given to the Southeastern PA Legal Aid ( www.LASP.org ), for those that can not afford legal representation.


To order memorial trees or send flowers to the family in memory of William Roeger, please visit our flower store.