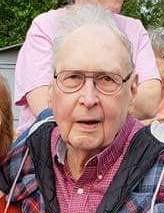 Born on February 15, 1935 in Mohnton, PA he was the son of the late Edwin and Burdette (Sturdavent) Miller.

He went to Mohnton High School Class of 1953, graduated second in his class and was a member of the National Honor Society.

He was a Draftsman for Murawall Cabinet Company in Pottsville, then General Manager of Bowl-A-Rama in Exeter, and retired from Carelink in Norristown.

He was a member of Grace Assembly of God in Spring City.

In addition to his wife he is survived by a son:

He was preceded in death by son, Donald Miller and step-son, Charles Wilson, Jr.

A private Funeral Service and burial will be Friday, April 24, 2020.

In lieu of flowers contribution may be made to Grace Assembly of God Church, 1271 W. Bridge Street, Spring City, PA 19475.

To order memorial trees or send flowers to the family in memory of Willard Miller, please visit our flower store.