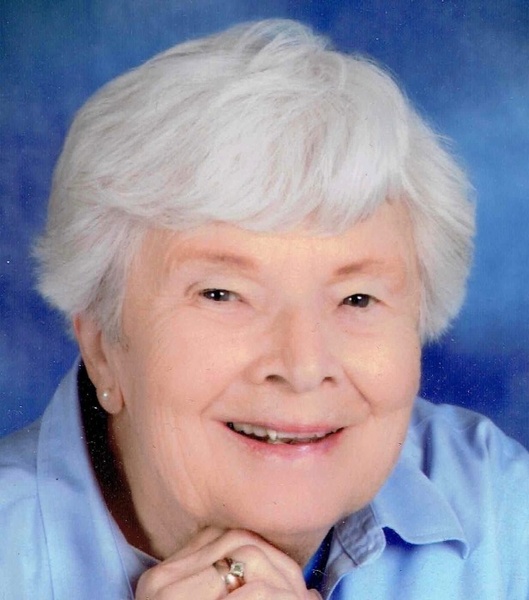 She was born in Charleston, SC on July 19, 1933, and was the only child of George
William Biven and Helen Isabella Biven (nee Rhea). Her father was a Lieutenant in the
US Navy and, as such, she lived in several states throughout her school years.
Eventually, the family settled in Massachusetts where Sue attended Methuen High
School. She graduated near the top of her class and went on to Colby College in Maine
where she studied English and was a member of the Sigma Kappa sorority.

It was at Colby where Sue met her husband to be, Selden C. Staples, during their
freshman orientation week. They were married on the day of their graduation in the
college chapel and were wed for almost fifty-seven years before his death in 2011.
After college, they traveled to various parts of the country where her husband was
serving as an officer and fighter pilot in the US Air Force. Upon completion of his
service, they became residents of Liberty Corner, part of Bernards Township, NJ, for
thirty-two years. During that time, she earned her teaching certificate from the College
of New Jersey, and became an elementary school teacher and substitute at Liberty
Corner School and Chancellor Avenue School, Irvington, NJ. Sue also spent these
years expressing her strong faith and love of church as an active member of St. Mark’s
Episcopal Church in Basking Ridge, NJ.

She and her husband retired to North Carolina in 1996 where they enjoyed the climate
of Holden Beach and the golf community of the Lockwood Folly Country Club. Just last
year, Sue moved to Ann’s Choice Retirement Community in Warminster, PA where she
enjoyed ‘Sunday Movie Night’ and making new friends.

Sue was an avid reader and enjoyed playing bridge. She was friendly, bright, kind, a
great conversationalist, and she had a lovely disposition. She made lifelong friendships
at Colby, and in the Air Force, Liberty Corner, and Lockwood Folly. Her love and
commitment to these friends was nurtured by her habits of communicating often and
attending as many Colby reunions as possible.

Sue is survived by her five sons: Selden and his wife Donna of Phoenixville, PA;
Spencer of West Chester, PA; Stewart and his wife Stacey of Mt. Pleasant, SC; Scott
and his wife Jennifer of Basking Ridge, NJ; and Stephen and his wife Kellie of
Princeton, NJ; as well as her fifteen grandchildren: Selden, David, Conor, Alexandra,
Harper, Pearce, Weston, Reid, Brooke, Emerson, Kelly, Jake, Cassidy, John, and Colby;
and one great grand-daughter Kaylin. She is also survived by her dear sister-in-law
Paula and her husband Dick Sholly, of Oceanside, CA.

A memorial service will be held on June 29th at St. Mark’s Episcopal Church in Basking
Ridge, NJ. Interment will be in Amherst, NH at a later date.


In lieu of flowers, please consider sending a memorial card in Sue’s name via St. Jude
Children’s Research Hospital at www.stjude.org by selecting 'Ways to Give’ and ‘Send a
Memorial Card’.

To order memorial trees or send flowers to the family in memory of Sue Staples, please visit our flower store.