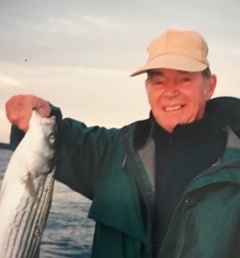 Sheldon Arthur Toombs of Phoenixville, PA passed away Wednesday, July 22, 2020 at the age of 93 at the Peter Becker Community in Harleysville, PA.  Sheldon was born September 22, 1926 in Philadelphia to Edgar and Cordelia (Parry) Toombs.  Sheldon was preceded in death by his wife of 46 years Jane (McGuckin) Toombs.  After discharge from the Navy at the conclusion of WWII, Sheldon joined the Bell Telephone Company where he would spend the next 38 years as a Telephone Pioneer and eventually a training manager.  Sheldon was an avid outdoorsman, wood worker and tennis player.  He spent his retirement years fly fishing, traveling the world, volunteering at Habitat for Humanity and enjoying his children and grandchildren.  He is survived by daughters Pamela Toombs and husband George Rowen of Leesburg, FL; Christine Smith, of Schwenksville, PA; Susan McDevitt and husband William McDevitt, of Coatesville, PA; sons Andrew Toombs and wife Lisa Toombs, of Perkiomenville, PA; Brian Toombs and wife Julie Toombs, of Gold River, CA; five grandchildren and one great grandchild. He was predeceased by son-in-law Patrick K Smith.

Sheldon will be buried next to his beloved wife in St. Ann’s cemetery, Phoenixville, PA. A celebration of Sheldon’s life will take place at a future date.  In memory of Sheldon, a contribution can be made to Habitat for Humanity in his name.

To order memorial trees or send flowers to the family in memory of Sheldon Toombs, please visit our flower store.