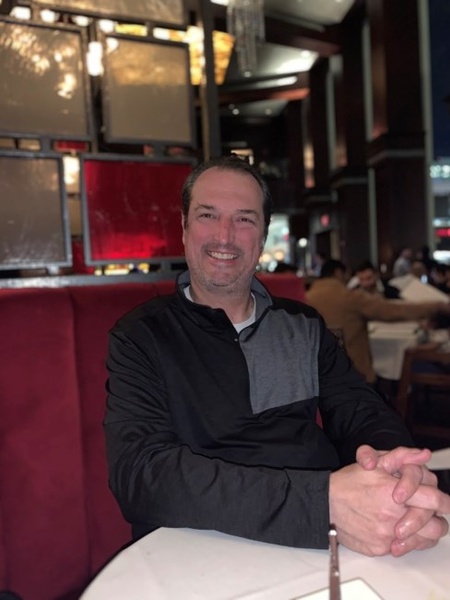 Scott was born March 30, 1971 in Phoenixville, Pennsylvania, the son of the late John R. Elvin, Jr. and Patricia Hurter. He was the beloved husband of Deirdre Hendrie Elvin.

Scott played football, basketball and baseball throughout his childhood, focusing on basketball at Devon Preparatory High School in Pennsylvania, graduating in 1989. He attended Elizabethtown College where he met his college sweetheart, Deirdre, the school mascot, and graduated in 1994 with a Bachelor of Arts degree. It was during college when he affectionately became known as Elvis because of his ridiculous sideburns.

Scott began his career at IBM in Wayne, Pennsylvania. Shortly after their marriage in 1995, Scott moved to Unisys, which took them to an overseas assignment in Amsterdam. He recently celebrated his 25th anniversary with Unisys.

He was an amazing father to his two boys, Ryan and Jake, and a devoted husband to Deirdre for over 25 years. He was their rock. He taught the boys what hard work and respect looked like and supported them in all of their endeavors. He especially enjoyed coaching his sons in their sports, baseball and basketball. One of his proudest moments was attending the 2021 Final Four game to watch his son Ryan play for the University of Houston against Baylor.

Scott and Deirdre moved to Round Rock in 2001, but he still loved all things Philly. While raising Ryan and Jake, Scott developed strong ties in the Round Rock community through his numerous coaching roles and was the founder of the annual Thanksgiving Turkey Bowl event, which benefited a local family in need each year. He coached hundreds of youth throughout the years and inspired many to achieve their goals in school and in sports. He was a father figure to many. He never met a stranger and was known as the “Mayor.” There was always room for more at his table, and yes that man could cook!

In addition to his wife and sons, he is survived by his mother Patricia and stepfather, Gary Hurter, step sisters Terri (James) Hutchinson and Kim (Russell) Davis, aunt and uncle Sally and Steve Ditlow, cousin Sabrina (Chris) Czyzewski, in-laws, Francis and Margaret Hendrie, brother in law, Frank (Karen) Hendrie, Jr, brother in law, Thomas (Suzanne) Hendrie, and sister in law, Maureen (Mark) Stanton, and numerous nieces and nephews. He was preceded in death by his father, John R. Elvin, Jr.

In lieu of flowers, memorial contributions can be made to Ball-Hard Basketball for youth player development.

The family would like to thank all of those that continually prayed, supported, and encouraged them during this difficult time; he was loved and respected and will be greatly missed by his friends, family, and all that knew him. #tribe.

Local services will be announced at a later date.

To order memorial trees or send flowers to the family in memory of Scott Elvin, please visit our flower store.