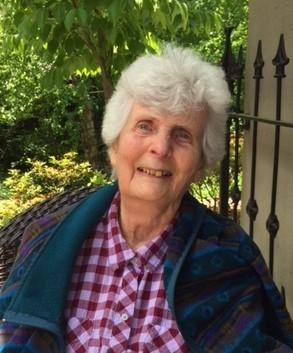 Rosemarie Jane (Prentice) Schmidt, 93, of Milton, Georgia passed away peacefully on Saturday evening, July 2, 2022 at Meadowood Retirement Community where she resided for the past 5 years.  She was the wife of the late Bill Schmidt.

Born on December 6, 1928 in McKeesport, PA she was the daughter of a Canadian pilot named Harry Prentice and Gertrude Gardill Williams.  Gertrude’s second husband, the man she called Pappy (Roy Williams), was more of a father to her.

Her family called her Tootie.  They lived on a farm near Duquesne Pennsylvania, raising chickens and growing their own food.  Tootie learned to sew and milk cows out of necessity.  She attended Mount Mercy College in Pittsburgh on scholarship.  While there she met and fell in love with Bill Schmidt, a returned veteran attending Carnegie Tech.

Bill gave her yet another nickname, Kate, though the reason for this name still remains a secret to the rest of the family.  They married in 1951 and after a brief stint in New Jersey moved to Atlanta.  They both worked for Lockheed, Bill as an engineer and Rosemarie as an editor.

Rosemarie took time off to raise their three children.   One of her favourite part time jobs during this period was helping out at the service station of her friends, Glenn and Katherine Wilkie.   When her youngest entered high school she eagerly went back to work at Lockheed, where she enjoyed editing airplane manuals and bantering with her colleagues.

People who knew Rosemarie as a young woman described her as “free-spirited” and “forward thinking”.  She was politically active and served as president of the League of Women Voters in the late 60’s.    Her children knew her as a loving mother who pushed them to always do their best.  She loved spending time in her garden and passed this on to her daughters.  She was also a crossword puzzle enthusiast.  She continued to be an expert seamstress, sewing custom-designed clothes for her children and her husband.

Rosemarie and Bill travelled extensively after retirement, touring Europe, Egypt and Israel.  She also loved traveling with her grandchildren, taking them on trips to Denmark, Alaska, Greece and Australia.

She was preceded in death by her son, Tom Schmidt and sister, Louise Damon.

Services will be held privately at the family home in Milton, Georgia.

To order memorial trees or send flowers to the family in memory of Rosemarie J. Schmidt, please visit our flower store.