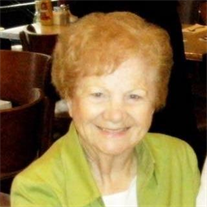 Rose T. (DiCino) Maher, 87, of Limerick, PA, formerly of Phoenixville, PA, passed away peacefully after a brief illness, on Sunday, October 23, 2016 with her family by her side. She was the wife of the late Charles R. Maher.

Born in Atlas, PA, she was the daughter of the late Nicola and Marianna (Calise) DiCino.

She was employed by the former W. T. Grant Department Store in Phoenixville, and in later years by Wyeth Laboratories until her retirement in the late 1980's.

Rose was a devout catholic, and a member of St. Ann Catholic Church in Phoenixville.

She was a member of Phoenixville, Boyertown and Pottstown Senior Centers, and a former member of AARP.

She was an excellent cook and baker, who showed her love through cooking. She made the best pizelles, Italian dishes, and Polish foods such as pierogis and stuffed cabbage.

and many nieces and nephews.

Relatives and Friends are invited to attend her Funeral Mass in St. Ann Catholic Church, Main Street and Third Avenue, Phoenixville, PA, on Saturday, October 29, 2016 at 10:30 am.

In lieu of flowers, contributions may be made to Seasons Hospice, 140 Nutt Road, Phoenixville, PA 19460.

Rose's family would like to thank the nurses of Seasons Hospice, "we think hospice means death, but as we watched you all take care of her, we realized it really means celebrating life".

To order memorial trees or send flowers to the family in memory of Rose Maher, please visit our flower store.