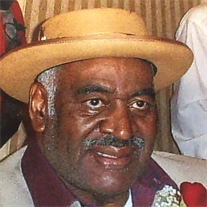 Ronald William Bearden, age 77 of Royersford, passed away Tuesday December 6, 2016 in Phoenixville Hospital. He was the beloved husband of Juanita Faye (Black) Bearden with whom he shared 57 years of marriage.
Born in Phoenixville, Ronald was the son of the late William and Irene (Ricketts) Bearden.
He was a graduate of Phoenixville High School.
Upon graduation, he enlisted in the U.S. Air Force and was Honorably Discharged in 1962.
Ronald had worked as a telephone lineman and later as a truck driver for many years until his retirement.
He was a member of Grimes AME Church in Phoenixville.
He enjoyed constructing models with his children.
In addition to his wife, Ronald is survived by daughters: Ronita Bearden of Royersford and Marion I. Johnson of Ambler. Sons: Ronald W. Bearden II, husband of Helen of Maryland and Charles A. Bearden husband of Shital of Eagleville. 7 Grandchildren and 2 brothers: Eugene, husband of Ruth and Richard, husband of Jacqueline Bearden. Brother of the late Patricia Bearden.
Relatives and friends are invited to his Funeral Service on Friday December 16, 2016 at 11 AM in the Bethel Baptist Church 412 Fairview Street, Phoenixville. Interment in Limerick Garden of Memories.
Viewing Friday December 16, 2016 from 9AM to 10:45 AM at the church.,

To order memorial trees or send flowers to the family in memory of Ronald Bearden, please visit our flower store.