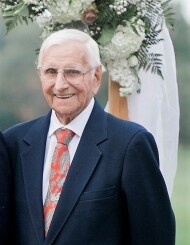 Born in Phoenixville, PA he was the son of the late Martin and Anna (Fabian) Kassel.

He played for Phoenixville High School football and was nicknamed "The Flying Dutchman of Tunnel Hill".  He was also a Fourth Degree member of the Knights of Columbus.

He is survived by his children:
Robert E. husband of Sandra Kassel;
Kathleen wife of Raymond Nester;
Karen wife of James Caudill.

Relatives and friends are invited to attend his Funeral Mass in St. Mary of the Assumption Catholic Church, 212 Dayton Street, Phoenixville, PA on Thursday, December 9, 2021 at 10:00 am. Masks will be required while in church at the request of the family.

To order memorial trees or send flowers to the family in memory of Robert Kassel, Sr., please visit our flower store.