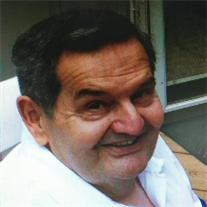 Michael J. Yosko Jr. age 74 of Pottstown, formerly of Phoenixville, passed away Sunday November 13, 2016 in Phoenixville. He was the beloved husband of the late Helen A. Yosko.
Born in Phoenixville, Michael was the son of the late Michael J., Sr. and Lottie (Sierzega) Yosko. He was a graduate of Phoenixville High School and had served in the Army National Guard.
Michael was the owner of a maintenance company that served Phoenixville and the surrounding communities for many years until his retirement.
Michael is survived by his children: Michelle Cruz and Michael Yosko, III both of Phoenixville, Stephen Yosko of Ashland, TN, Lynne Walter and her husband Louis of Gilbertsville and their children; Alexa, Emily, Kaylee and Peyton, Andrew Hudak and his wife Monica of Pottstown, Thomas Hudak and his wife Christine of Boyertown and Michael Hudak and his wife Jeane of Reading. Also survived by many grandchildren and great grandchildren. He was the brother of Connie Williams and the late Loretta McCann.
Relatives and friends are invited to his Funeral Service on Thursday November 17, 2016 at 11 AM in St. James Lutheran Church 1101 East High Street, Pottstown, PA 19464. Interment will be privately held.
A viewing will be held from 9:45 AM to 10:45 AM in the church.
In lieu of flowers, please make a donations to Season's Hospice 140 Nutt Rd., Phoenixville, PA 19460.

To order memorial trees or send flowers to the family in memory of Michael Yosko, please visit our flower store.