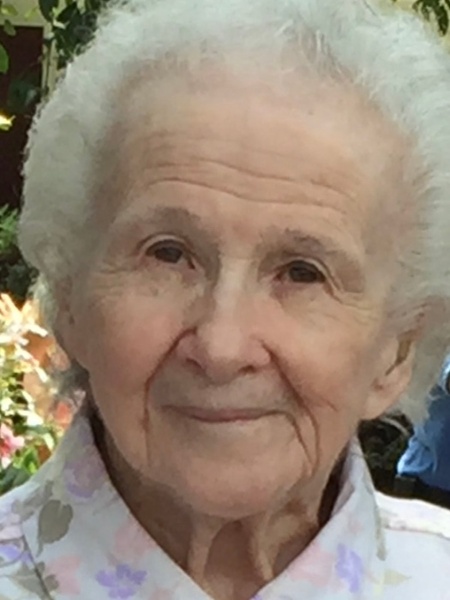 Margaret “Peg” (Craner) Peterman of Phoenixville died Friday morning, October 11, 2019, at Gwynedd Health Care and Rehabilitation in Lansdale. She was 95.

She was the daughter of the late Charles and Anna Craner of Phoenixville. She attended St Mary School and graduated from Phoenixville High School in 1942.

As a child, Peg won a writing contest and was awarded a bicycle, which was a great treat during the Depression. Her father died when she was only 12, leaving her mother to raise three children alone during the Depression. Peg helped care for her younger brother Charles and worked to help supplement the family income. She participated in the war effort by working at Dettra Flag Co.  in Oaks, where her job was to sew stars on American flags.

She married Harry H. Peterman in 1950 and settled in North Wales, PA, where they lived for 55 years, raising four children. She was a member of St Rose of Lima parish. Her greatest pride was her grandchildren and great-grandchildren. Harry died in 2005.

Margaret was known for her warm smile and her sense of humor. She was a loving wife, mother, grandmother, and great-grandmother.

She was known for her homemade iced tea and peanut butter fudge. She enjoyed reading, crossword puzzles, and never missed an episode of Jeopardy! She was a loyal Philadelphia Phillies fan. She loved day trips to Shady Maple, and the occasional trip to Harrah’s.

Peg lived at French Creek Manor in Phoenixville from 2011 to September of 2019. Fellow residents enjoyed her company and sense of humor. She joined St Ann Parish in Phoenixville.

In addition to her husband, she was predeceased by her son, Robert, her sister, Charlotte Heflin and her brother, Charles “Jock” Craner.

She is survived by a daughter, Nancy Szewczak (Deacon Mark) of Phoenixville, a son, Kevin of Elsmere, Del., a daughter, Kathleen Schilling of Stallings, N.C., a daughter-in-law, Eileen of Coopersburg, eight grandchildren and two great-grandchildren.

There will be a viewing from 9:45 to 10:45 am Wednesday, October 16, at St Ann Chapel at 604 Main St in Phoenixville, Pa. and a Mass of Christian Burial at 11 am. Interment will be at Green Lawn Cemetery on Sumneytown Pike, Lansdale, Pa.

In lieu of flowers, contributions may be sent to the American Diabetes Association, P.O. Box 15829, Arlington, VA  22215

To order memorial trees or send flowers to the family in memory of Margaret "Peg" (Craner) Peterman, please visit our flower store.