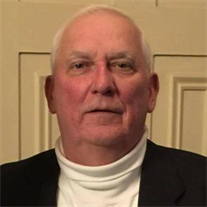 In 1969, Lou began his teaching career at Bishop Kenrick High School in Norristown. From 1982 to 1993 he was the Dean of Students at St. Pius X High School in Pottstown. He went back to teaching and chaired the Language Department at Kennedy-Kenrick High School from 1993 to 2010. Most recently Lou served as a clerk in the Chester County Prothonotary Office.

Lou was known to have a passion for many things in his life, especially music. He loved the Mummers and participated in the parade when he was 7 years old. From the time he was 11 he attended every parade until 1987 when he began to march in it. He marched with Duffy String Band, Greater Overbrook String Band, and Greater Kensington String Band, and he also held administrative roles over the years. He was a Charter Member of the Philadelphia Mummers Museum.

He was preceded in death by brothers, Michael Amici, Andrew Amici and sister, Dona Amici Donnelly.

Relatives and friends are invited to attend his Funeral Mass in St. Joseph Catholic Church, 3640 Schuylkill Road, Spring City, PA, on Friday, December 9, 2016 at 11:00 am.

In lieu of flowers, contributions to enable the Greater Kensington String Band serve and teach music to those in our community, may be made payable to GKSB Enterprises, Inc., 7235 Edmund Street, Philadelphia, PA 19135, or to Mom's House, 145 S. Main Street, Phoenixville, PA 19460, or to St. Joseph Catholic Church.

Condolences may be given at www.GatchaFuneral.com .

To order memorial trees or send flowers to the family in memory of Louis Amici, please visit our flower store.