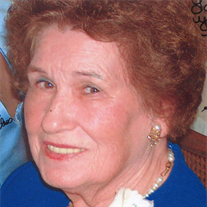 Leona B. (Bernat) Sech, age 93, wife of the late Robert S. Sech of Phoenixville, PA, died on Sunday, March 19, 2017.
She was born in Phoenixville on October 22, 1923, daughter of the late John and Catherine (Nowak) Bernat.
Leona attended Holy Trinity Elementary School; was a graduate of Phoenixville High School, and attended Norristown Business College.
She was employed at Summerill Tubing Company, Bridgeport, PA-a Defense Plant (WWII) as a Mill Office Clerk for 2 years. She was also as a Federal Government Office Clerk of Valley Forge Army Hospital for 25 years in Admissions-Engineer Division and Logistics, as well as in Personnel in the Department of Commerce-Census Bureau, Philadelphia, PA. Upon closing of the Military Hospital, she was employed as a Night Shift Supervisor at the Kimberton Company, Phoenixville, for 8 years and retired in 1986.
She was a lifelong member of Holy Trinity R.C. Church and the Rosary Society as well as the Women's Club.

Relatives and Friends are invited to attend her Funeral Mass in Holy Trinity Catholic Church, 240 Dayton Street, Phoenixville, PA at 10:00 am.

Relatives and Friends may call at the church on Friday morning from 8:45 am to 9:45 am.

To order memorial trees or send flowers to the family in memory of Leona Sech, please visit our flower store.