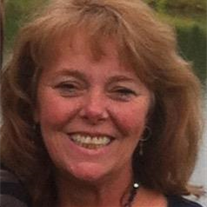 Kym was born on December 26, 1961, a daughter of the late Samuel and Mildred Ash.

She graduated from St. Pius X high school in Pottstown in 1979.

Kym worked for the US Postal Service as Postmaster of Valley Forge and later in, Devon, PA.

She was married to her surviving husband, Edward Howie, for 14 years.

She was preceded in death by sister, Lyda Kline.

Relatives and friends are invited to attend her Funeral Mass in St. Mary of the Assumption Catholic Church, 212 Dayton Street, Phoenixville, PA, on Tuesday, June 6, 2017 at 10:00 am.

Visitation will be held in the church on Tuesday morning from 8:45 am to 9:45 am.

To order memorial trees or send flowers to the family in memory of Kymberly Howie, please visit our flower store.