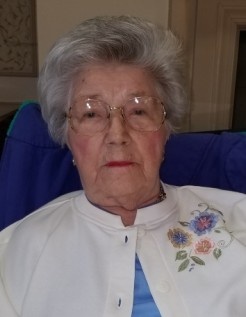 Katherine (Cekot) Zielinski, 97, wife of the late Josef Zielinski of Phoenixville, PA died on Friday, April 10, 2020 in Regina Nursing Center in Norristown, PA
Born on August 16, 1922 in Beniowa,  Ukraine she was the daughter of the late Peter and Anna (Wasylechko) Cekot.
Katherine and her husband Josef immigrated to the United States in 1949 and settled and made their home in Phoenixville.
She was a member of Sts. Peter & Paul Ukrainian Catholic Church.
Katherine loved her family and extended family and took great pleasure in watching her grandchildren grow up.  She loved cooking (especially ethnic foods), gardening, and sewing.
She is survived by 3 daughters: Sophia Smith and Michael Raymond, Oksana wife of Thomas Daly, and Mary Zielinski; 4 Grandchildren: Matthew and Vanessa Pestritto, Christie and Deron Morgan, Michelle and Justin Porter, and Katie and Stephen Kealey; 8 great grandchildren:  Andrew, Alaina, Aubrey, River, Harper, Roman, Parker, and Salvatore.
She was preceded in death by 4 sisters and 2 brothers.
A private funeral service will be held with burial in Sts. Peter and Paul Cemetery,  A Memorial Divine Liturgy will be announced at a later date.

To order memorial trees or send flowers to the family in memory of Katherine Zielinski, please visit our flower store.