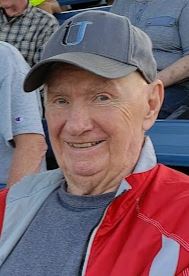 Born in Phoenixville, PA on July 4, 1931 he was the son of the late William and Esther (Brittain) Reifsnyder, Jack graduated from Phoenixville High School in 1949 where he played baseball and football.  On June 27, 1953, he married the love of his life, Jean.

Jack played Minor League Baseball with the Chicago White Sox before working as a manager at B.F. Goodrich in Oaks until its closing in the early 1980’s.  He was a volunteer gym teacher at St. Basil the Great Catholic school more than 10 years.  One could always find him helping out at Beverage World in Phoenixville where he was known around town as the "Beer Man".

Jack was a sports enthusiast and loved watching the Phillies and Eagles.  He coached the Big Yellow Machine softball team at St. Basil the Great School where they won many championships; Women's Fast Pitch Softball at the Phoenixville Civic Center and was one of the 4 founding coaches (Red Sox) at the Babe Ruth League in Phoenixville.  But what he loved most was spending time with his family, watching his grandchildren play sports and going to the casino with his wife of 68 years.

He was preceded in death by a brother, William (Huffy) Reifsnyder, Jr.

Relatives and friends are invited to his visitation at St. Basil the Great Catholic Church, 2340 Kimberton Road, Phoenixville, PA on Saturday, September 4, 2021 from 9:15 to 10:45am.  A Funeral Mass will be celebrated at 11:00 am with Rev. Gary Pacitti officiating.

To order memorial trees or send flowers to the family in memory of John "Jack" Reifsnyder, please visit our flower store.