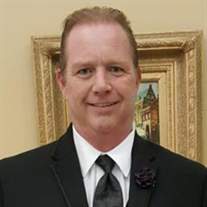 Born on July 6, 1963 in Norristown, PA, he was the son of Joan Ann (Fenlon) Richards of Phoenixville, and the late L. Edward Richards.

In addition to his mother, John is survived by his daughter, Abigail (David) Paltrow, and a granddaughter, Chloe Paltrow of Port Orange, FL. He is also survived by his sister, Beth A. (Bob) Batten, and two brothers, David (Janine) Richards and Tim Richards. He leaves to mourn him 3 nieces, Kelsey, Kaylin, Cassidy, and 3 nephews, Kyle, Bobby and Billy.

John received his B.S. degree from Villanova University, and his MBA in International Finance from Temple University. He passed his CPA on his first attempt in 1985.

He worked at Aramark for much of his career, and was most recently employed by U.S.A. Technologies in Malvern, PA.

He was a member of Overbrook Baseball and PAPA Playground Recreation Council.

John will be forever remembered for his generous heart and kind spirit.

Relatives and friends are invited to attend his Funeral Mass in St. Mary of the Assumption Catholic Church, 212 Dayton Street, Phoenixville, PA, on Wednesday, April 5, 2017 at 10:00 am.

A visitation will be held in the church on Wednesday morning from 8:45 am to 9:45 am.

To order memorial trees or send flowers to the family in memory of John Richards, please visit our flower store.