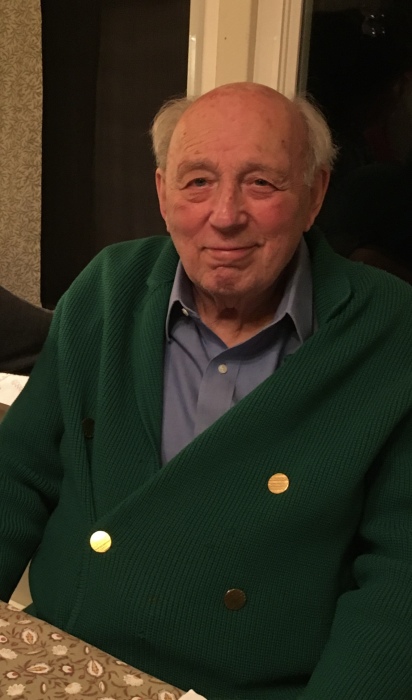 John Lukacs, a distinguished historian, author, and educator, died on May 6.  He was 95.  Born and raised in Hungary, Lukacs moved to the United States at the end of the Second World War, when it became clear to him that his country was fated to be occupied by the Russian Red Army.  With an advanced degree in history from the University of Budapest, he found employment first at Columbia University in New York and then at Chestnut Hill College in Philadelphia, where he went on to teach for nearly 50 years.  He also served as a visiting professor at a number of universities, including Columbia, Johns Hopkins, La Salle and Princeton in America, and the universities of Budapest and Toulouse abroad.

Lukacs wrote some 35 books, all in English, his adopted second language.  These covered a wide range of topics, everything from portraits of prominent Philadelphians to a tribute to his native city, Budapest in 1900.  He returned to three subjects frequently.  The first was the Cold War and the place of eastern Europe within it, his 1961 and 1966 History of the Cold War becoming required reading in many college courses.  In later years, he turned his attention to the Second World War, particularly the opposed visions of Winston Churchill and Adolf Hitler.  In books such as The Last European War (1976), The Duel (1991) and Five Days in London (1999), he explored what he saw as the defining conflict of the twentieth century—an old-fashioned patriotism versus a new and very dangerous type of nationalism.  This interest brought him a new and often non-academic audience, including Hollywood, as the movie The Darkest Hour was in large part based on his work.  Finally, he wrote frequently about how the post-war era signaled the end of an age.  Modernity, he argued forcefully, has run its course, and something new will take its place.  Though he could not identify it in detail (“an age takes a long time to end,” he liked to say), he feared that this emerging era could be a new barbarism, lacking in the basic decency that he contended characterized bourgeois civilization.  This brought him yet another new audience, less so through books than through articles he wrote for magazines such as American Heritage, The American Scholar, Harper’s, The National Review, and the New Yorker, as well as the many talks he gave.

Lukacs called himself a “reactionary,” but in truth his ideas evaded easy classification.  He was for a time a darling of the political right, due largely to his skepticism of the idea of progress, but he never accepted American conservatism’s binary view of the world.  The Cold War, he insisted, had never been a conflict between ideologies (communism and democracy); instead, it was a struggle between powers, Russia and the United States.  At the same time, the political left could not understand a man who called himself an “original sinner,” and who insisted that economic conditions never determine human belief.  As a thinker, he remained to the end a true original.

Lukacs lived for over 60 years outside of the small town of Phoenixville in Chester County, Pennsylvania.  He found there a community of friends and a home far removed from the one he knew in his youth.  But he loved it and never left it, dying in a bed moved into his downstairs library of nearly 20,000 books, surrounded by family.  In his closing days, as he drifted in and out of consciousness, he talked in Hungarian as much as in English, signaling a life come full circle.

Relatives and friends are invited to attend his Funeral Mass at Saint Mary of the Assumption Catholic Church, 212 Dayton Street, Phoenixville, PA, 19460 on Wednesday, June 5, 2019 at 10:00 am with Rev. John Hutter officiating. Burial will be private.  A reception honoring and celebrating his life will be held afterwards at his home, Pickering Close.

The family requests that in lieu of flowers, please make donations in his memory to Saint Mary of the Assumption Catholic Church. www.stmaryassumption.org

Due to John's International reputation other obituaries written from various news publications across the country have already been posted online. Search his name to read more.

To order memorial trees or send flowers to the family in memory of John Lukacs, please visit our flower store.