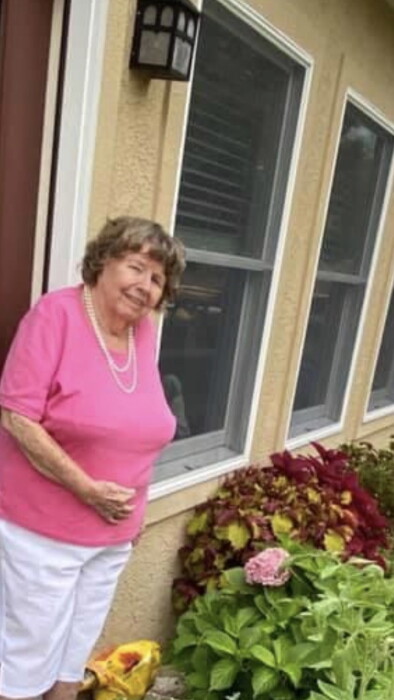 Born on January 27, 1930 in Philadelphia, PA she was the daughter of the late J. Warren and Elsie (Rogers) Keel.

She was a Sales Manager for Tupperware for 18 years and the Candleland Parties for 15 years.

She was an active member of Royersford Bible Fellowship.

Funeral Services and burial will be private.

In lieu of flowers contributions may be given to Seeing Eye at www.seeingeye.org.

My tradition for several homegoing services has often been to select a flower as a symbol of the personality of the person being honored.

Various flowers such as the majestic sunflower or, in contrast, the lowly dandelion have been part of the venue.

For the memory of Joan, I have broken tradition and instead have chosen to select from the whole garden of flowers and few special ones.

My first choice is a beautiful white rose with its soft petals and dynamic fragrance.  It is one of those flowers which seem to require that it be released from its natural habitat and relocated in a beautiful vase, then placed in the center of the dining room table where its fragrance brightens the surrounding area just as Joan, with her marvelous meals and outstanding hospitality brought a fragrance to the hearts of those who were the recipients of hers and Bob's hospitality.

You may ask, "Why the rose?"  To me, it symbolizes the purity of spirit in the life of Joan.  Those who knew her background recall that there were many thorns in her life.  Some were physical...some were filled with emotion...and she certainly endured some spiritual thorns even as we all do.  But, blooming from this thorny bush, is out white rose of God's creative beauty.

As I walk around in my imagination, I see a beautiful purple lilac bush, adorned with flowers in full bloom.  Birds are drawn to the flowers just as people have been drawn to Joan.  God gave her a spiritual influence of love and care which brought the sweet aroma of testimony from Joan's life.

On a nearby window sill is located a gorgeous array of pink violets.  These are indoor plants but they remind me of the beauty that they display during the cold winter months when so many other flowers have hibernated for the season.  Like the violets, Joan was a constant bloomer regardless of the weather conditions.  Regardless of cold winters or hot summers, she manifested a testimony of full bloom.

Back to the flower garden, where blossoms of red, white and blue petunias are in full array.  Not only are petunias flowers that bloom on and on with seemingly no end, but in their blooming, they are bountiful.  An interesting thing about a petunia is the fact that should you cut off a stem to carry inside for a display, the petunia will multiply itself to the point that the one stem with its flower cut off becomes two stems of floral fascination.  Our petunia, Joan, can cite several cases in which she was "cut off", sometimes in meaningless dismay, but Joan was one who knew how to come back with love and kindness.  Many folks would find themselves in depression under similar circumstances, but not so with Joan.  She was a true petunia.  Her ability to reproduce new blooms was absolutely amazing.

Our flower collection would not be complete without the addition of some yellow daffodils.  Now, for me, the daffodil looks like the old fashioned phones, so I selected the daffodils for my collection not only because of their beauty, but because they are reminders of the ministry God gave Joan of encouraging folks over the phone.  Many are the recipients of her phone support.

My final flower is subject to debate.  I call it the "tomato flower".  The question is, shall we call the yellow bloom on a tomato plant a flower or is it something else since the debate exists whether the flower that results in a tomato is a fruit or a vegetable.  For me, it is both.  Sometimes a snack of a tomato newly picked from the vine is like a refreshing piece of fruit.  But, when tomatoes are cooked down for spaghetti sauce, they take on a whole new meaning.

So why did I select the yellow flower on the tomato plant?  Some years ago, Joan gave me a hybrid plant, one of four which she had purchased.  The race was on to see who would get the best tomatoes.  In a short time, the outcome was clear.  Her three plants produced tomatoes in abundance.  I think my plant somehow forgot it was a tomato plant.

The application of this final flower is clear when we think of Joan's identification with spiritual matters, Joan was a special individual.  She was a clear image of spiritual growth...like the tomatoes she grew in abundance, so Joan's life was a reflection of spiritual values.  She loved people regardless of their financial status in life or their physical well-being.  She cared for many who were deemed to have only a short time to live.  She carried on a constant concern for those in need.

Thus ends our flower collection.  Together, the individual flowers make a glorious bouquet.  And, Joan's flower collection will be a "bouquet in memory".  She has passed on, but her influence...her heavenly aroma...her spiritual beauty will continue.  To God be all the glory..

To order memorial trees or send flowers to the family in memory of Joan Kerr, please visit our flower store.