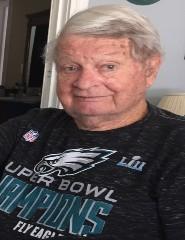 Born in Phoenixville, PA on August 18, 1939, he was the son of the late George Mazei and Stella Strzelecki Mazei. In addition to his parents, he was predeceased by two infant sons. He retired and made the move to Calabash, NC in 1998 where he enjoyed golfing and made many new friends.

Jerry was a loving husband of 53 years to his wife Kathy, an amazing father to three children and two children in law and an incredible grandfather to four grandchildren. He was a U.S. Navy veteran and often referred to his time in the service as one of the best times of his life. He was a retired driver from United Parcel Service (UPS) after thirty plus years of employment and was a member of Calabash Elks Lodge.

A mass will be celebrated at 10:00 am on Wednesday, November 3, 2021 at St. Brendan The Navigator Catholic Church in Shallotte, NC followed by a Celebration of Life at the Champion’s Grill in Brunswick Plantation.

In lieu of flowers, donations may be made to the American Stroke Association.

Online condolences may be sent to www.brunswickfuneralservice.com

A Funeral Service will be held in Phoenixville and announced at a later date.

To order memorial trees or send flowers to the family in memory of Jerome Mazei, please visit our flower store.

Local services to be announced