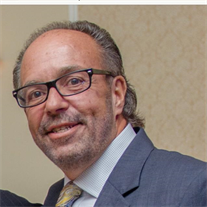 Born on April 12, 1954 and raised in Conshohocken, PA, he was the son of Mary C. (Powers) DeMedio of Conshohocken, and the late Anthony J. DeMedio.

Gary attended local schools, was active in community and school sports, played football while attending Valley Forge Military Academy, graduated from Plymouth-Whitemarsh High School and studied at Villanova University prior to entering the Real Estate Business in 1972 when he became the President of DeMedio Keystone Realty Group, LLC., his uncle and father's family business started in 1944.

He will forever remain in our hearts.

Surviving in addition to his mother are,
daughter, Gianna DeMedio,
the love of his life, Cheryl Garbarino,
"the kids" Tara, Tony and Austin Duca,
his #1 Golf Partner and grandson, Adam Duca.

He was also loved by many nieces, nephews, cousins and friends.

He is also survived by sister, Sharon wife of Thomas Hadfield.

In lieu of flowers, donations in Gary's name may be made to the Borough of Conshocken, 400 Fayette Street, Suite 200, Conshohocken, PA 19428, (to fund the Community Center at the Fellowship House), or to the American Heart Assoication, 1617 John F. Kennedy Blvd., Philadelphia, PA 19103.

To order memorial trees or send flowers to the family in memory of Gary DeMedio, please visit our flower store.