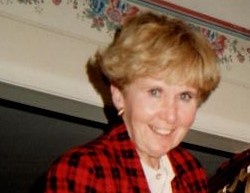 She was the wife of the late Joseph Richard "Dick" O'Donnell and the late James O'Malley.

Born on July 29, 1923 in Philadelphia, PA she was a daughter of the late John and Frances (Heany) Wallace.

Claire served in the U.S. Navy during World War II and then worked as a secretary for the Colonel at the former Valley Forge General Hospital, and then for Nuclear Regulatory Commission, and the Environmental Protection Agency.

She was a member of St. Ann Catholic Church and the Ladies Auxiliary and enjoyed playing Bridge, Golf, and was an expert at completing the NewYork Times crossword puzzles.

She is survived by:

She was preceded in death by her daughter, Justine wife of Don Schaedler, and her sister, Justine Teague.

To order memorial trees or send flowers to the family in memory of Claire O'Donnell O'Malley, please visit our flower store.