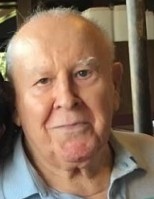 Born on August 15, 1927 in Skippack, PA he was the son of the late John and Paraska (Iwaniuk) Siomko.

He was an honorably discharged veteran having served in the United States Army during the Korean War. He was stationed in Germany, Holland, Korea, and Yugoslavia.

Upon returning from service he worked the family farm in Skippack, and was an Auto Body Technician and Painter for over 40 years until his retirement.

He was a member of Saints Peter and Paul Ukrainian Catholic Church, Phoenixville.

He traveled all the 48 Continental States and Canada.

He lived a simple life but was much more than how he lived.

Preceded in death by his siblings, Nellie, Stephen, Nicholas, and William Siomko.

Burial will follow in Saints Peter and Paul Cemetery, Phoenixville

In lieu of flowers contributions may be made to Saints Peter and Paul Ukrainian Catholic Church, 472 Emmett Street, Phoenixville, PA 19460.

To order memorial trees or send flowers to the family in memory of Alexander Siomko, please visit our flower store.